The Ditto DX Forensic FieldStation from CRU-DataPort is a professional forensic FieldStation for data capture and analysis. It replaces a laptop or other host machine during data acquisition. The field station is portable and can be used for creating disk clones. You can configure, manage, and operate via a networked/VPN Web browser interface. It images from and writes to network locations, one or two SATA drives, or one or two eSATA mass storage devices. The field station also creates standard DD or E01 disk images. It automatically logs activity that can be saved along with case information. In addition, the field station is made up of rugged, all-metal, fan-free construction, and is easily upgradable. 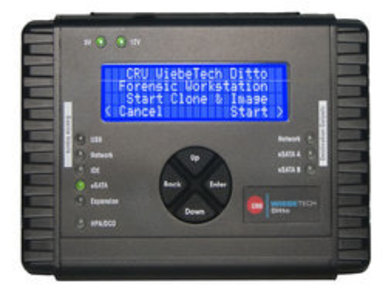 Ditto DX performance has been optimized for various forms of media, including SSDs, NVMe/PCIe, hard drives, SD and CF cards, and others.

With hard drives and networked file shares exploding in size, Logical Imaging is more important than ever. Ditto DX Logical Imaging performance is twice that of the Ditto device. And with automatic, pre-selected search and acquire capability, Ditto DX slashes the time it takes to capture needed evidence.

Create Logical and Physical Images in the Field

Use dual SATA outputs simultaneously with the same performance as one eSATA (single, dual and mirrored). Images can also be output to large volumes, including NAS and other network destinations, as well as portable RAID enclosures.

Clone, DD, E01, L01 with MD5 or SHA-1 hashing. Ditto DX also offers a combined mode that captures a clone and DD (to different destination drives) in a single pass reading of the suspect drive.

Ditto DX is capable of sanitizing drives with preset erase modes or a user-configurable pattern.